The Eurogroup reached an agreement on Greece last week (with the Greek government's comment), reviewed in details in EuroIntelligence:

· The deal extends the Master Financial Assistance Facility Agreement (MFAFA) for up to four months (end of June), which is two months short of what Athens requested. There is no mention about any third bailout program, neither about any debt relief, both needed to avoid default according to EuroIntelligence.

· The troika becomes "the institutions and continues to play a rolebut the questions of monitoring and enforcement are left unclear.

· The Greek government is to come up with a first list of reform measures (see the FT) subject to approval. For EuroIntelligence, this is not such a Greek victory, as the list has to be based on the current bailout, with very much the same measures expected and no clarity on what will happen to the 30% of measures Varoufakis said were unacceptable. In the absence of approval, another Eurogroup meeting will be held, before the bailout expiry on Saturday. Hugo Dixon (Breaking Views) makes suggestions for the list of reforms: creating a genuinely independent tax authority (possibly accompanied by a tax amnesty; removal of tax and social security privileges enjoyed by the rich, the Greek Orthodox church, and the country's super-rich ship owners), liberalizing markets, setting up a bad bank.

· The conclusion of the review is not expected before end-April, so Greece has to find 4.7bn for the three month period.

· The Greek government agreed that it would not roll-back reforms or introduce measures that have a negative fiscal impact, raising questions about Syriza's pre-election pledges.

· The Greek government is expected to deliver "appropriate primary fiscal supluses,"explicitly lower for 2015, where the 3% target is likely to be revised downwards.

Warning Signals / Crisis Economics: An association committed to a deep understanding of where the global economy is going 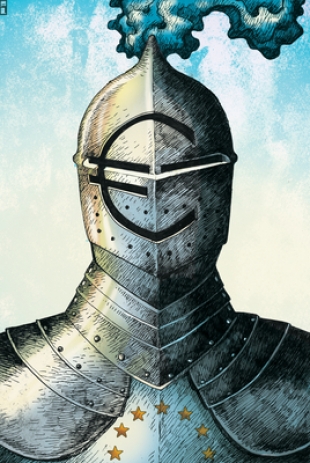