Convenience: This article present three issues faced by the Brazilian state in order to (re)launch economic growth : control of public expenditure, tax reform and infrastructure improvements. The pensions reform recently approved will allow the government to save substantial amounts of fiscal resources in the upcoming years, thanks to the introduction of a minimum retirement age. The tax reform aims at unifying similar taxes and reduced distortions in the current system. The current government is trying to favour the presence of private investments in large infrastructure projects.

For many people around the world, Brazil is seen as one of the fastest-growing economies in the world. Indeed, the country enjoyed an annual average of 7,3% real GDP growth between 1950 and 1980, and after two lost decades, it grew annually by 3,5% in the 2000s. However, the past 10 years were marked by the deterioration of economic conditions that led the country to a 2-year economic recession from 2015 to 2016. Once again, a familiar chapter unfolded in Brazilian history: political crisis, high public debt, public deficit. But this time it was different, indicating that the country may have learnt some lessons from its turbulent past.

This time there was no coup d'Etat, a common solution to political turmoil in Brazilian history. Instead, Parliament impeached the sitting president Dilma Rousseff in 2016 and held regular elections in 2018. Corruption investigations led to the prisons of several high-raking businessmen and politicians, including former president Lula. This time there was no default on public debt, an all-times classic as Argentina demonstrated several times, including last year. Instead, Parliament passed in 2016 a constitutional amendment to freeze public expenditure for 20 years in order to control the trajectory of public debt, currently at 85% of GDP, which is tremendously high for an emerging economy. This time there was no printing of numeraire to cover the public deficit, which in former times too the country down the death spiral of hyperinflation. The Central Bank, though not formally independent, has remained a sanctuary of technical decision making and serious economic research.

Despite this apparent positive note, the country's economic and financial issues are not getting solved at an acceptable speed, and much needs to be done to protect the country from falling into another economic crisis. In the war against economic slowdown, there are three main fronts that must be tackled by the current administration:

In terms of public spending, Congress passed in 2017 a constitutional amendment that freezes real government spending, as alluded above. For the next 20 years, the government faces a ceiling on all public expenditure, except service of public debt. The objective is to allow the Brazilian debt-to-GDP ratio to start falling and stabilize. The rule was lauded by its supporters as a smart and effective mechanism to control public expenditures without forcing drastic short-term cuts in expenditures. However, it hides a ticking bomb: government expenditure on pensions have been rising steadily, consuming currently 1/3 of federal spending or 7 % of GDP[1] . As they continue to rise, they will squeeze out other (important) items of spending, since the ceiling must be respected. If total expenditure is fixed and pensions rise, other expenses ought to fall: investments, defence, and others. If things continue as they are, the government will just become a bank cashier that raises money and gives it out as salaries and pensions, without any ability to decide its allocation. For more than a decade, current revenues (taxes, contributions, fees) do not suffice to pay salaries, pensions and service the debt of the federal government, as the graph shows. The government relies heavily on debt issuance, privatizations and other capital revenues. 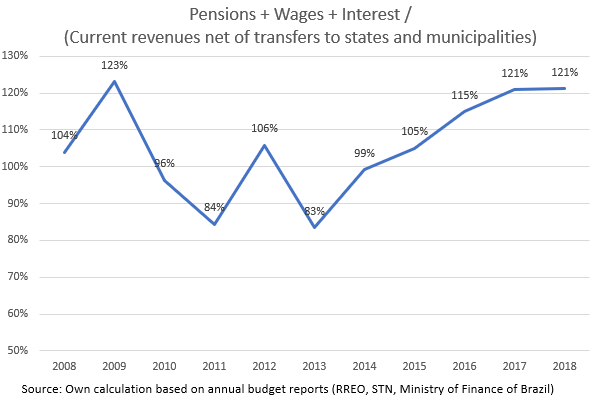 Fixing the pensions is crucial to allow the government to breathe. In 2019 Congress voted a pension reform that is expected to reduce the pace of increase of government spending and save about EUR 200 billion (BRL 800 billion) over the next ten years. The main innovation of the reform was the institution of a minimum retirement age at 62 for female and 65 for male workers. Previously, workers could retire only based on some minimum contribution period.

The reform was widely welcomed as an important step in fixing federal public finance, but it fell short of solving the problem more at large, as state servants of states and municipalities were left out of the reform. Subnational public finances in Brazil are in dire state. The expenditure ceiling also applies to them, and payments to state public employees are paid out of their treasury funds.  Fortunately, most states have already passed their own state pension reform, but large states such as São Paulo and Rio de Janeiro haven't done that yet. The danger of subnational finances going bust is that it may ultimately require a bail out by the federal government, jeopardizing the federal efforts to contain its own fiscal mess.

The second large reform under discussion fixes the Brazilian tax system to reduce some of its most severe distortions. The main proposal focuses on the Brazilian VAT (Value Added Tax). Brazil was among the second country in the world to put in place a VAT, only after France[2] . However, Brazilian VAT is shared among municipalities, states and the national government in an inefficient way: services are taxed by a municipal VAT, transactions with goods are taxed by a state VAT and by a federal VAT, and industrial processes are taxed by a federal VAT. There are several VATs and none of them generates credits against each other, whereas tax credits are the very essence of VAT. In short, the proposed reform wants to abolish all these taxes and create an actual VAT, where any transaction with services, industrial goods or whatever other cost may generate credits for the next phase[3] .

But this is still far from happening. The current government at some point considered simplifying its own federal VATs only, without touching the subnational ones. The problem is that any changes in subnational taxes will entail revenue redistributions both on the vertical axis (between federal, state and municipal spheres) and on the horizontal axis (among states, or among municipalities). Winners will be pleased, losers will want compensation, and the resources will have to come from somewhere. This fundamental problem has been more prominent in blocking tax reforms than in pension reforms.

It is hard to stress enough the importance of a tax reform in Brazil. The inefficiencies driven by this VAT are obvious: the inability to deduct taxes leads to cascade-taxation, augmenting prices and hurting sectors with more complex process chains. Brazil is not even able to guarantee, to this day, that all its exports are really tax free. This happens because some inputs, like services, cannot generate credits for the taxes on goods. The current tax system dampens the ability to aggregate value, at low cost, in potentially multiple phases of a production chain. The hope is that fixing this will liberate a potential that has been suffocated by the current system.

The third herculean homework for the Brazilian government is infrastructure. Roads, railways, airports, waterways, everything is needed and in short supply. Plug in the fiscal issues that the governments have been facing and the conclusion is obvious: there is just not enough resources to build or manage these public facilities. Following an international trend and in response to another fiscal crisis in the 1990s, the Brazilian governments  federal and states  have signed contracts conceding transportation facilities to private companies. The current paucity of funds has revived the interest in similar deals, and Parliament is debating a new regulatory framework to encourage private investors to join infrastructure projects in concessions and Public-Private Partnerships.

In 2019, the operation of several airports was conceded to the private sector for 30 years, usually with the obligation to make expansion investments. Several of the airports were attributed to international operators such as Aena (Spain) and Zurich (Switzerland). The French group Vinci is operating the airport of Salvador since 2018. In 2019, the government has also successfully carried out an auction for a large railway project connecting the North of the country to the main exporting ports in the South.

How hopeful can we really be about change? This will depend, of course, on how the current government navigates the domestic political turbulences as well as the increasing uncertainty in the international arena. The current government, led by President Jair Bolsonaro, wants to steer the country towards a more free-market oriented economy: cut regulation, open markets (including public procurement), and privatize public companies. However, unless macroeconomic risks related to the public finances are resolved, all the free-market rhetoric will not make GDP growth great again. The pension reform was an important achievement, but the government still faces a sizable budget deficit. Moreover, there is just too much uncertainty about how Jair Bolsonaro can manage the political unrest that helped him get elected.

Meanwhile, other relevant topics occupy the agenda of the government: violence, education and environmental protection. Though these topics may be technically independent of the economic reforms that are desperately needed, they consume the political capital that will get them approved. Even on the economy agenda there are a number of other reforms, more at the microeconomic level, being discussed and proposed: in particular the alleviating taxes for low skilled labour and opening the country to international trade It is unclear whether the government will put its economic agenda on top of other political battles. But to unleash the much-needed economic growth, there is more than enough for a four-year mandate.

[1] According to the National Treasury summary report (RREO), in 2018 the federal government spent BRL 590 billion in pensions, which represents 25 % of the total expenditure of BRL 2.2 trillion. If one excludes constitutional transfers to subnational governments and payments of interest on public debt from the total, pension benefits reach 37 % of federal expenditure. These figures do not include the subnational expenditure by states and municipalities with their own pension systems for state employees.

[3] The proposal was put forward by a tax think-tank, and is gaining support by members of Parliament and government. The website of the think tank is http://ccif.com.br/ 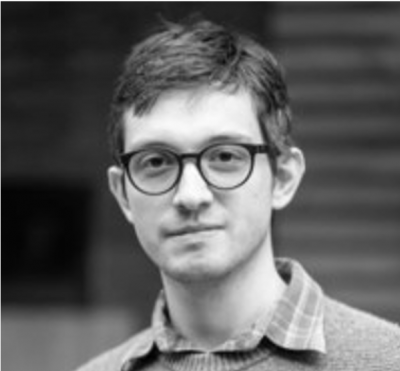 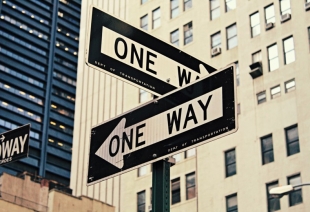 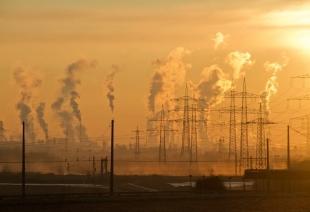 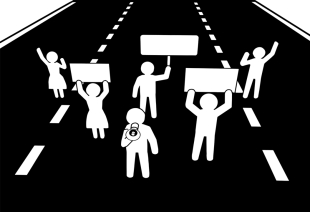